*Disclaimer – Photo of Anthony Bourdain is from Google Images* 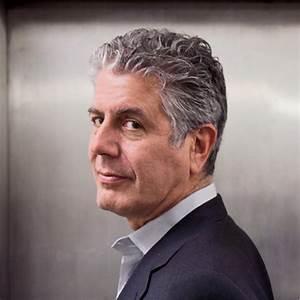 He traveled to places many didn’t go and he took his television viewers along on the trip.  Bourdain visited with the locals and ate local food.

This is the same thing Clementine Paddleford did, except she never had a television show.

Anthony Bourdain attended the Culinary Institute of American, became a chef, and a food writer.  Clementine Paddleford had a degree in journalism.  She never attended a culinary school, was never a chef, but she was a well-known food writer.

What made Bourdain and Paddleford well-known?

They chronicled how people ate. 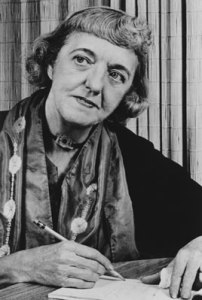 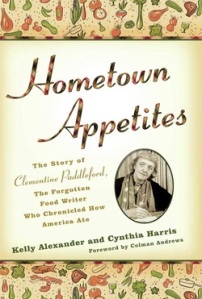 “In the late summer of 1921, Warren G. Harding was in the White House, Allied forces occupied the Rhineland, the U. S. Congress had just passed a quota on immigration, and Adolf Hitler became head of the Nazi Party.  On the heels of World War I, isolationism was in and multiculturalism wasn’t even on the horizon.  For Clementine Paddleford, newly arrived in New York City and the proud renter of a room in a boarding house at 520 West 122nd Street, on Morningside Heights north of Columbia University, this meant facing one of Manhattan’s challenges and figuring out how to conquer it: the subway.

“There she was, in homemade outfits Jennie had lovingly stitched from patterns Paddleford had picked, summer-weight wool suits, blouses with big bows at the neck, a tote bag at her side loaded with pencils and pads, the picture of a career gal of the day, and a greenhorn at that.  At her first act of independence in the city, Paddleford enrolled in graduate-level-journalism courses at New York University, despite her proximity to Columbia.  These met three evenings a week and required a long subway trip.”

Both How America Eats and Hometown Appetites are filled with recipes.  One of my favorite summer beverages is from these books: Plumade.

In a large stockpot over medium-low heat, stew plums in water until very soft and the liquid is a deep rose color, about 15 minutes.  Strain juice, return to pot and add to it the sugar and cinnamon.  Heat gently until sugar is dissolved, two to three minutes.  Add grated lemon rind and cook three more minutes.  Strain again.  Stir in lemon and orange juice and serve in tall glasses with chipped ice.

Be sure to sign up for my newsletter: Cindy’s Notebook

“Hometown Appetites: She Served Up Americana (With a Side Dish of Quirk)”

Today is Clementine Paddleford’s birthday.  If she were alive today she would be 119 years old!

“Hometown Appetites: She Served Up Americana (With a Side Dish of Quirk)”
By: Benjamin Schmerler

Clementine Paddleford wrote, “We all have home-town appetites.  Every other person is a bundle of longing for the simplicities of good taste once enjoyed on the farm or in the home they left behind.”

Benjamin Schmerler of the New York Post wrote, “If the food writer Clementine Paddleford were alive today, she would have at least two Food Network shows (one devoted to cooking, a second to travel), a weekly newspaper column, a cookbook series and, of course, a blog.  Or so it is easy to imagine by reading Kelly Alexander and Cynthia Harris’s smartly drawn, surprising uplifting biography ‘Hometown Appetites'”.

Don’t forget to sign up for my newsletter and be entered into a giveaway drawing. Giveaway ends, September 30.

Giving away a signed hardback copy of Hometown Appetites; a $20 Amazon Gift Card; and a paperback copy of A Flower for My Mother.

Comments Off on “Hometown Appetites: She Served Up Americana (With a Side Dish of Quirk)”

Happy Birthday to Me!

Today’s my Birthday and I sent out invitations for others to join me, however, everyone seemed to be too busy so I am eating CAKE all by myself.

Like my invitation stated, I am promoting all genres today even though February is Romance month.

And since no one wanted to party…guess you all had to big of a night on Sunday night after the Super Bowl Game…I am partying by myself.

If you would like a chance to win a copy of one of the books below, subscribe to my newsletter before midnight (Feb. 7th).  I will choose the winner on Feb. 8th.

Take time to visit the authors below and sign up for their newsletters.

by Clementine Paddleford and Cynthia Harris

Stories Paddleford wrote about her childhood.

by Cynthia Harris and Kelly Alexander

You can only get this book in Paperback and Kindle, if you would like to purchase a hardcover, I will be happy to sell you a copy.

Clementine loved desserts.  This is one of her favorites.  The recipe was published in How America Eats by Clementine Paddleford. (NY: Scribner’s and Son), 1960 and in Hometown Appetites by Kelly Alexander and Cynthia Harris (NY: Gotham), 2008

Sift flour, baking powder, and salt into a large bowl.

In a separate bowl, cream butter and sugar thoroughly.  Add vanilla.  Beat in well-beaten yolks.  Add flour alternately with milk, beating until smooth after each addiction.  Fold in the stiffly beaten egg whites.

Divide batter in half.  To one half, add chocolate and stir in.  Put into layer pans, alternating spoonfuls of light and dark batters.  Gently drop the pans a few inches onto the counter to settle the batter.  Gently smooth tops of layers with spatula.  Bake 18 to 25 minutes or until a toothpick inserted into the center of the layer comes up dry.  Put layers together with fudge frosting and frost outside of cake.

Sift confectioner’s sugar and cocoa together into a medium bowl.  Stir in butter, then coffee, then vanilla, mixing well with a wooden spoon after each addition until frosting is smooth.

Clementine Paddleford could not jump on the bandwagon of radio and television because she had a bout with throat cancer in 1931.

In 1953, Time magazine declared her the “best known food writer in the United States.”

Paddleford’s food writing career took off when she was hired at Food Market Report for The New York Herald Tribune in 1936.  Along with this job came a side job, food writing for This Week magazine, a Sunday Supplement in all major cities newspapers.

This Week magazine is much like Parade is today.

In 1948, Paddleford and her editor at This Week magazine, William I. Nichols, came up with a plan.  Paddleford would travel across the United States and collect recipes from the best cooks in the country.  Her weekly series was called “How America Eats.”

In 1960, Paddleford took the best of the recipes that she collected between 1948 and 1960 and wrote a book How America Eats published by Charles Scribner’s & Sons.

Hometown Appetites can be purchased online at Amazon and at your local bookstore.  If your bookstore does not have the book in stock, ask them to order a copy for you.

Comments Off on Bird’s Eye View of Clementine Paddleford 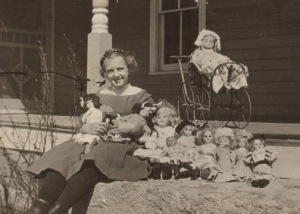 Clementine with her dolls

Clementine as either a teenager or at college, Manhattan, KS

Comments Off on Paddleford Photos

James Beard wrote that Clementine Paddleford was “the getting-aroundest person he ever knew besides Eleanor Roosevelt.”

The Prologue to Hometown Appetites is titled “The Getting-Aroundest Person.”  Here we find Clementine Paddleford heading to Hawaii to interview Ouida Hill.

Here is a part of the prologue:

“With their cool, custard-like texture, almost like ice cream, but not quite, the bananas sent her yellow pencil flying. “You can’t believe your tongue!”  Paddleford scribbled in her notebook.  She knew these beauties would do for any sort of party, anywhere.  Mrs. Hill was taken aback: The dessert was an off-hand concoction, a dish she had made so often and with such lack of forethought that she was shocked the great food writer was interested.  It was just a dessert of her own invention, she explained to Paddleford, something she thought of long ago and far away from the island paradise.  Paddleford persisted and learned another secret.”

Peel bananas.  Wrap each in waxed paper, twirling both ends to create a tight seal.  Place in freezer until very firm, overnight or at least 3 to 4 hours.

Chill 6 wide-mouthed dessert glasses or shallow bowls in the freezer for 5 minutes.  Remove glasses from freezer and pour 1 tablespoon of the cream into each.  Unwrapping the bananas one by one, slice half of them 1/4 inch thick, distributing the slices evenly among the glasses.  Sprinkle 1 teaspoon of sugar over the bananas in each glass.  Then drizzle 1 tablespoon of cream atop the sugared bananas.  Slice and divide remaining bananas among the glasses and repeat the process, sprinkling each serving with 1 teaspoon of the sugar and then topping with additional 1 tablespoon of the cream.  Serve immediately.   Yield: 6 servings.

Comments Off on Paddleford visiting Ouida Hill in Hawaii

Colman Andrews wrote the foreword to the book I co-wrote, Hometown Appetites, The Story of Clementine Paddleford, the Forgotten Food Writer Who Chronicled How America Ate (NY: Gotham), 2008.

This is the last paragraph from the foreword:

“On the evidence of How America Eats alone-never mind the hundreds of thousands of words she wrote in her other books and in magazine and newspaper articles never collected between hard covers – Clementine Paddleford patently cared about our nation’s culinary heritage and realized that if it wasn’t documented and publically appreciated, it might well disappear.  This is an almost trendy sentiment today, but it was a rare thing in mid-twentieth-century America.  She probably would have laughed to hear herself described as a sociologist or anthropologist, but those are in part what she was.  More to the point, she was also an engaging writer who knew good food when she had it, and dedicated her career to helping us know it too.”

Comments Off on Colman Andrews wrote the Foreword for Hometown Appetites

Kick Off of the 4th Anniversary Celebration of Hometown Appetites

Four years ago today, Hometown Appetites, The Story of Clementine Paddleford, the Forgotten Food Writer Who Chronicled How America Ate was released by Gotham.

The book has two awards:

Check back tomorrow for more celebrating!

4 Year Anniversary of the Publication of Hometown Appetites (September 18th!)

I will celebrate the 4th Anniversary of the publication Hometown Appetites, The Story of Clementine Paddleford, the Forgotten Food Writer Who Chronicled How America Ate, (NY: Gotham) with recipes from the book and more beginning on September 18, 2012 (when the book was released ) leading up to and including September 27, 2012 (Paddleford’s birthday).

Come celebrate with me!

Comments Off on 4 Year Anniversary of the Publication of Hometown Appetites (September 18th!)